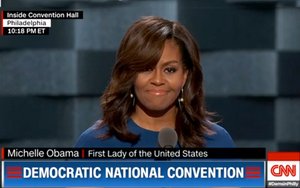 CNN witnessed a dramatic rise in TV ratings for the first night of the Democratic National Convention -- posting the strongest results of all TV networks during prime time.

On the social media front, 3.3 million tweets were sent by 693,000 people for the first night of the DNC event, according to Nielsen Twitter TV Ratings.