The company’s net income for the quarter fell 77% to $12.3 million from $53.3 million a year ago, according to USA Today. Total operating expenses rose 6.9%.

According to the company, advertising revenue would only be up by 18.5% if they excluded numbers from recently acquired properties.

But these numbers were lower than the expected per-share profit of 31 cents and revenue of $768 million, based on numbers from analysts polled by Thomson Reuters, according to The Wall Street Journal.

Gannett’s media strategy this past year has been to buy local publishers, consolidate the local news business and use publishers’ affiliated digital properties as space for digital marketing opportunities for potential advertisers.

"We are pleased to report tremendous progress in our strategy to further consolidate the U.S. publishing industry, as well as make internal and acquisition investments to drive toward a digital future," CEO Robert Dickey stated.

Dickey said that the company expects annualized revenues acquired in the last 12 months to be more than $80 million, by the end of the third quarter. He also said the annualized digital component of Gannett’s revenues will likely “approach $1 billion.” Gannett said it expects revenue growth between 7% and 9% for the second half of 2016.

During the company’s earnings call with analysts, Dickey said he wants to add “something between 15 to 30 (additional) titles," to the USA Today Network, which oversees its local and national brands, including USA Today. "That's our primary focus," he added.

He also wants to “pursue cost improvement initiatives in our core operations as well as recently acquired assets, particularly in the printing, packaging and distribution channel.”

Earlier this year, Gannett made public its intentions to buy Tribune Publishing Co., now rebranded as tronc Inc., for about $864 million. Tronc rejected the offer multiple times. But Gannett won’t back down, and according to a report from the New York Post, in the last two weeks has met with Tribune “and discussed its continued interest in the company.”

In early July, Gannett acquired the North Jersey Media Group, which includes prominent dailies The Record and The Herald News, as well as dozens of community newspapers and other affiliated digital media properties like the site northjersey.com. 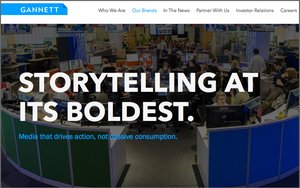