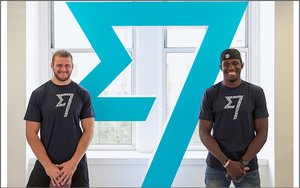 Boehringer is a Minnesota Vikings wide receiver and Dable is a New York Giants wide receiver. The campaign is supported with “Touching Down,” a new content series. TransferWise is a peer-to-peer international money transfer platform similar to PayPal.

The series will feature Boehringer (the first European player to be drafted without playing college football) and Dable (who began playing at age 19) as they look to make the transition from overseas leagues to the rosters of the Vikings and Giants.

“Touching Down”will follow their preseason journey as they fight to make the teams and remain in America. The first player to score a touchdown will win free transfers for their home countries; Germany and France, respectively. The first partnership of its kind in the NFL, the campaign provides the winning nation with 500 free transfers of up to $20,000 for TransferWise customers.

TransferWise is offering $10 million of free transfers to existing customers if either Anthony or Moritz scores a regular-season touchdown in the 2016/2017 season. Customers must register by Sept. 1 to be eligible for their free transfer by sending an email to: touchingdown@transferwise.com

Kicking off in August, Touching Down will live exclusively at TransferWise.com/NFL. Fans can also follow along on social media via Facebook.com/TransferWise or on Twitter @TransferWise.

“Up until now, our primary focus in the U.S. has been on building brand awareness through PR and content marketing,” said Joe Cross, U.S. general manager at TransferWise. “However, ‘Touching Down’ is the next stage of our content marketing program which will build in celebrities, athletes, and other influencers by telling unique stories that engage our target audience.”

“We will be focusing primarily on creating short-form video content for social media -- this includes Facebook, Twitter, and YouTube -- and leveraging media interest around Anthony and Moritz to align them with our narrative as a European tech startup breaking into the U.S. market in our own right,” Cross tells Marketing Daily. “We are also looking into adding a TV element to the campaign though we are in the very early stages of those discussions.”

The company hopes to extend the series through each players' first season, “though there are various factors at play in that decision, including Anthony and Moritz needing to first make the rosters of the Giants and Vikings, respectively,” Cross says. “We are also looking into creating a longform version of the series if we find that viewers have an appetite for more in-depth content.”

Boehringer and Dable’s backgrounds are relevant to the company’s international customer base.

“As a European company, we find that a significant portion of our U.S. customers were born in Europe and are building careers and lives here much like the journeys that Anthony, who hails from France, and Moritz, who is from Germany, are undertaking,” Cross says. “At the same time, the fact that we’re capturing America’s favorite pastime gives us the opportunity to engage both European and American audiences.”