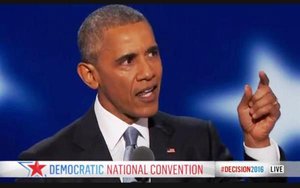 The Democrats are winning the hope sweepstakes.

More to the point, they’re putting on a better TV show than the gloomy Republicans did a week earlier. Night 3 of the Democratic Convention and Audacity of Hope Fest in Philadelphia was a case in point.

Maybe it was a combination of factors in their favor -- not least of which is the fact that at any convention, Republican or Democratic, the speakers are preaching to a very receptive choir. And the Democrats on Wednesday night were a very receptive audience indeed.

And they benefit from another advantage: The Republican nominee happens to be a very easy target. It’s why he’s been the butt of late-night comedy jokes for so many years.

There’s just a lot about Donald Trump that lends itself to ridicule. This is especially true when he makes statements, literally during the Democratic Convention when the Democrats are in control of the nation’s mass media for four days and nights, that are so ill-considered they make you wonder if he’s actually trying to throw the election. Yesterday’s headline-making example was his statement that seemed to encourage Russia -- a not-so-friendly power -- to spy on America (specifically Hillary Clinton’s emails).

So on Wednesday night, a string of high-profile and reasonably respectable Democrats – and one very impressive Independent -- came on stage in Philadelphia to repeat a simple message: Americans would have to be as insane as Donald Trump to elect him president. By contrast, they painted a picture of Hillary Clinton as embodying the kind of level-headed competence America needs in the Oval Office.

The messaging scored, aided greatly by elements of production that made great use of the Wells Fargo Center audience. The Democratic Convention audience seems better miked than the Republicans were. This week, in contrast to last week, you’re really hearing the cheers from the Democrats. The place seems better lit too.

There’s even better interstitial music between the speakers, helping to keep the audience energized and expectant -- something you would really only know if you’ve been watching the convention on C-Span. On the news channels, the bits between speakers are taken up by color commentary by pundits and news anchors.

As noted earlier this week, I can do without the parade of celebrities at these things, although I also freely acknowledge that this stuff plays well with just about everybody else but me, so you can’t blame the Democrats for making full use of their show business constituency.

On Wednesday night, this took the form of an on-stage, all-star performance by dozens of Broadway stars singing “What the World Needs Now Is Love.” I reacted in my customary fashion -- rolling my eyes and jotting something derisive in my notebook. “Oh no,” I wrote, “the next thing you know, the Democrats will be holding hands and singing ‘Kumbaya’ around a big campfire.”

On the other hand, you had to marvel at the Democrats for marshaling all that talent, especially the on-stage reunion of Cagney and Lacey (Tyne Daly and Sharon Gless).

Speaker after speaker made their cases for Hillary -- Leon Panetta, Vice President Biden and, of course, President Obama. At one point during vice presidential nominee Tim Kaine’s acceptance speech, which didn’t wrap up until about 10:40 p.m., I wondered if President Obama realized he was likely to get pushed out of prime time by this guy.

Kaine’s speech was overlong and dull as dishwater. For most of us, it was our first impression of Hillary’s choice for a running mate and the impression was: The man’s a windbag who’s in love with himself.

The most curious speaker of the night was Michael Bloomberg, a billionaire who’s not a Democrat (he was a Republican, but now he’s an Independent) speaking to an audience of Democrats, many of whom were progressives who hate billionaires. But their hatred of all one-tenth-of-one-percenters like Bloomberg tends to lift, I suppose, when the billionaire in question comes over to their side and supports their candidate.

With his direct attacks on Trump, Bloomberg was the most quotable speaker of the evening -- a fellow billionaire passing extreme judgment on another member of the same exclusive club. There was something very powerful about it.

As for Obama, he brought tears to the eyes of convention attendees and TV viewers alike (I am not referring to myself; I remained dry-eyed). On the merits of Hillary Clinton and the demerits of Donald Trump, Biden's speech, delivered earlier, was more powerful.

However, let the record show that, as a native Philadelphian, I resented Biden’s use of the “Rocky” theme as a musical introduction. Is nothing sacred?