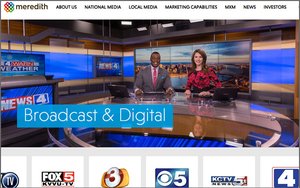 Overall TV revenues for the period were up by 9% to $141 million.

Looking at the coming fiscal first-quarter 2017 period, the company says its TV group’s revenues are estimated to be 20% higher, with about one-third of total fiscal 2017 political advertising revenues expected to be recorded in the fiscal quarter.

Meredith’s National Media Group division -- its magazines -- had revenue of $295 million during a period, posting a $109 million operating loss versus a $44 million profits in the same period a year before.

Total fiscal 2016 revenues gained 6% to $527 million -- with print advertising for the year up 3% and digital advertising 16% higher. Circulation revenues increased 5% to $329 million.

Meredith’s print and TV revenues were virtually unchanged $294.6 million versus $295.8 million, with net loss of $90.5 million versus net earnings at $42.6 million in the same period a year ago.