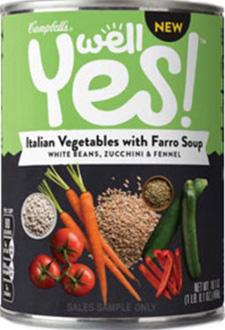 Campbell Soup Company’s latest moves to reinvent itself as a maker of innovative, “clean” products include a new soup line featuring ingredients such as quinoa, kale and lean protein, to launch in January.

The idea for the line, called Well Yes, came from some of the company’s own female employees, who worked with other consumers and the company’s product developers and marketers to get the launch accomplished in record time, Mark R. Alexander, president of Campbell’s Americas Simple Meals and Beverages segment, told Food Business News.

Other initiatives underway in the division, which saw a 3% decline in sales in the just-reported third quarter ended May 1, include expanding distribution of the year-old Campbell’s Organic soup, launching other clean soups, and unveiling a new ad campaign for the Chunky line.

The last will feature six new TV spots that —as in past efforts — feature NFL stars (this time Drew Brees and Odell Beckham). But the new creative concept will actually give the star treatment to the achievements of ordinary guys, Alexander reported.

Campbell, which has committed to removing artificial ingredients from most of its products in North America by the end of 2018, last week stressed to investors its commitment to becoming the food industry’s “most transparent” company. It also announced a host of other upcoming product launches, such as a Bolthouse Farms milk made from peas.

The company will be driving awareness of the shift in its corporate philosophy in part through its Real Food Index, which tracks its progress against its declared goals, Alexander said.

“We believe that real food should be made with recognizable, desirable ingredients from plants or animals,” summed up president and CEO Denise Morrison. “It should be responsibly crafted using ethical sourcing and sustainable practices that safeguard natural resources. Lastly, it should always be delicious, safe and available at a fair price — all three without compromise.”

“We have defined our real food philosophy and laid out a plan to evolve our portfolio over time. This will not be a straightforward journey, or an easy one, but we are resolutely committed to it,” added Alexander.

Campbell has projected that successful implementation of these precepts and innovations will not only generate sales growth in the soup category for the first time in years, but yield $2 billion in sales from “fresh packaged products.”