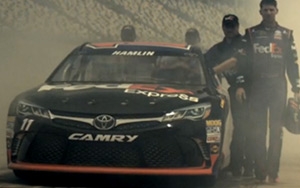 The list of top brands involved in NASCAR continues to grow.

Auto-Owners Insurance, Stanley DeWalt, Fastenal, O’Reilly Auto Parts and Axalta have all renewed with or entered the sport this season. Global brands on board include Toyota, Mars, MillerCoors and Shell.

“For Toyota and many other brands, competing in NASCAR provides an unmatched opportunity to speak to an engaged, loyal and diverse fan base,” Paul Doleshal, senior manager motorsports and assets, Toyota Motor Sales, U.S.A., tells Marketing Daily. “With our NASCAR program, we’re able to highlight Toyota’s commitment to America and tell our story of how our Camrys and Tundras are built right here in America by members of your community.”

Since Toyota entered NASCAR racing in 2004, the automaker has seen  product consideration among NASCAR fans increase to a level on par with competitors in the sport, Doleshal says.

A charter agreement with race teams, five-year track sanctioning deals, and a bevy of new or renewed long-term partnerships have contributed to NASCAR’s business growth over the last several years, according to NASCAR.