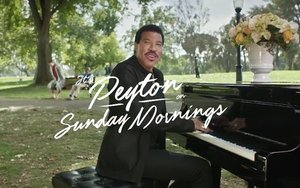 Now that he’s retired from his day job, Peyton Manning has his Sundays free to watch all the football he wants.

A new AT&T campaign for its DirecTV NFL Sunday Ticket package depicts the gridiron star enjoying the ability to watch all the games he wants, from anywhere. Commercials in the campaign feature Lionel Richie at a piano introducing the segment as “Peyton on Sunday morning” (sung to the tune of his hit, “Easy like Sunday morning”).

“This is his first year retired and away from the game. What better way to transition his Sunday’s from the playing field to the living room,” Valerie Vargas, vice president advertising and Marketing Communications for AT&T, tells Marketing Daily. “We’ve never featured a recently retired player before, so we felt this being Peyton’s first year out of the league we had one shot to really capture that transition and his need for NFL Sunday Ticket.”

In one spot, Manning, clad in a bathrobe and T-shirt on a couch, dials up his brother Eli imploring him to come over and watch some football. The younger Manning, who is in a locker room preparing for a game, notes that he’s still active in the NFL. “I’ll pencil you in for Tuesday,” the retired player says.

Other spots in the campaign depict Peyton Manning on a park bench talking up the benefits of the Sunday Ticket package with an older gentleman. The older man, who claims to have been retired for years, advises Manning to “work as long as you can.” A third spot has Manning — still in his bathrobe — at a grocery checkout, noting that the line he’s in matched his old number from his playing days.

The campaign, produced by Grey, will run as AT&T’s national advertising campaign, which will be supported with a “robust social campaign,” Vargas says.