Thrilla In Phila., Day 4: The Coronation Of Hillary 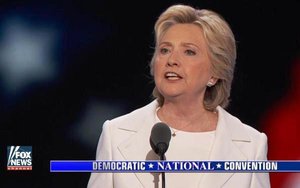 Suddenly, everyone is sticking up for contractors.

It emerged as one of the major talking points of the Democratic Convention’s sustained attack this week on Donald Trump, how he supposedly stiffed contractors who did work on his Atlantic City casinos.

“In Atlantic City, 60 miles from here,” said Hillary Clinton onstage Thursday night in Philadelphia, “you will find contractors and small businesses who lost everything because Donald Trump refused to pay his bills.”

It was the umpteenth time I’d heard this from the convention speakers this week, and I had the same thought each time: Since when do contractors deserve our sympathy?

I don’t really know why Trump stiffed them (assuming that he did). Maybe it was part of one of his famous bankruptcy filings that perhaps absolved him of his obligation to pay them, which would be unfair to them. Or maybe he didn’t like the work they did -- or didn’t do -- which is often the case with these people. If this was the reason, then good for him.

This week at the four-day Democratic Convention, which wrapped up Thursday night with Hillary’s coronation, Trump was accused of many things -- some deservedly, some not.

To illustrate how Trump is unlike “the rest of us,” one speaker on TV Thursday night -- Rep. Xavier Becerra of California -- complained that Trump has no callouses on his hands and worse, probably doesn’t even know the price of a container of milk. What is this -- an election or “The Price is Right”? And how does Rep. Becerra know so much about Trump’s hands (other than their size, which Trump has been quite open about)?

Hillary’s qualities as a mother was another recurring theme this week. Understandably, it was taken up by Chelsea Clinton when she preceded her mother on the convention stage Thursday night. As Ted Danson and Mary Steenburgen looked on admiringly from the Wells Fargo Center audience (glimpsed by a TV camera at one point), Chelsea described how her busy mom always found time to help little Chelsea “find shapes in the clouds.”

Aww, isn’t that sweet? Yes, it is sweet. It’s also something 10 million or more mothers probably do every day and it doesn’t qualify any one of them to be president. Oh, well, that’s what a great deal of the selling process in these presidential campaigns consists of -- a lot of airy claims about parenthood and the like. Trump’s kids did it at the Republican Convention a week earlier. Thursday night it was Chelsea’s turn.

Not that the Republican and Democratic conventions amounted to the same thing. Far from it. In terms of the quality of their production and choreography -- and most importantly, the force of their selling messages -- they weren’t even in the same league. The Democratic Convention this week was one of the best-designed events of this type that I can remember.

It seemed to have been mapped out very shrewdly night by night with the aim being to bring it to a climax right where it needed to be -- with Hillary’s acceptance speech at the very end. One way the organizers laid a pathway toward her climactic speech was to ensure that no other speaker with her star power would be on the agenda Thursday night. With President Obama, Vice President Biden, Bill Clinton and others all squared away on previous evenings, Thursday night belonged to Hillary.

No detail seemed to go unconsidered, right down to the choice of narrator for the promotional video that was shown before her speech. You could almost hear the video’s producer declaring: “Only the world’s best narrator will do. Get me Morgan Freeman!”

Not surprisingly, Hillary brought the house down, leaving many with the impression that if the election were held on the morning after the Democratic Convention, she would win in an historic landslide. And she still might, unless Donald Trump can somehow pull his foot out of his mouth early enough in what remains of the campaign season to rebuild his image following the shredding his reputation took for the past four nights on TV.

politics, tv
1 comment about "Thrilla In Phila., Day 4: The Coronation Of Hillary ".
Check to receive email when comments are posted.
Next story loading