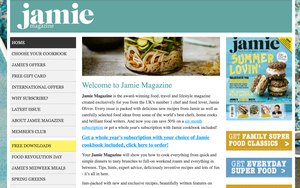 Titled Jamie after the British celebrity chef, the magazine is a monthly food, travel and lifestyle publication.

Hearst will produce all of Jamie’s editorial content and sell advertising across the print magazine, as well as online on the brand’s Web site.

Hearst will work with Jamie Oliver and his team, as well as use its “consumer insight” and “strategic expertise” to grow the magazine.

Judith Secombe, group publishing director of Hearst Made, stated: “We look forward to using our consumer publishing know-how to further grow Jamie’s audience with a refreshed magazine and an increased distribution strategy.”

For the last five years, London-based content marketing agency John Brown Media had been selling Jamie’s ads in print, and handling print and paper production, a spokesperson told Publishers Daily. The magazine’s content was handled in house by the Jamie Oliver Group.