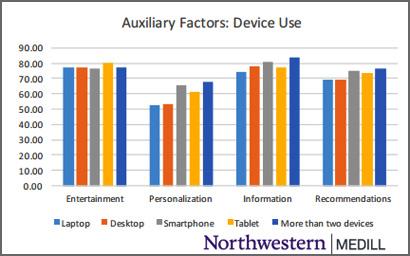 Satisfaction and perspective are subjective. What makes me aware or satisfies my needs might not satisfy yours, so it was interesting to read the comments sparked by Monday's SearchBlog.

An article ran in Monday's SearchBlog that presented data from Econsultancy, in partnership with Adobe Marketing Cloud, which shows how nearly half of brands and agencies still do not have a mobile strategy. In the comments section, Ed Papazian, president of Media Dynamics, wrote (I'm paraphrasing) that just because a media platform has a lot of users doesn't mean most, or all, advertisers should use it.

While Papazian makes a valid point, consider this. Laptop and desktop users -- with a Digital Satisfaction Index (DSI) score of about 55 and 56, respectively -- are least satisfied with personalization, which for me is one of the main reasons I connect with brands and retailers online and in stores. As a consumer, I have many options. And according to the recent report from Intent Lab, I'm not the only consumer thinking this way.

The stat comes from Performics and Northwestern University, which recently created the search-based Intent Lab, along with a quarterly report that measures consumer attitudes and perceptions of online marketing.

Users of laptops and desktops are least satisfied with personalization, in my opinion, because advancements in technology now allow advertisers to talk with consumers nearly one-to-one through their mobile device, which they keep with them nearly every waking moment of the day. Technology on the horizon will make that exchange between brands and consumers one-to-one. Some consumers may not want that one-to-one connection. Advertisers will need to use extra caution and draw the line. Consumers might find it creepy.

Privacy will become more of an issue. Those participating in the Intent Lab study showed their dissatisfaction with privacy on laptops, desktops, smartphones, tablets, as well as those using more than two devices, with DSI scores between 35 and 40. Those rating trust on these devices scored a bit higher -- between 50 and 55.

The Intent Lab's study and DSI scores show that overall smartphone users, in general, are the least satisfied with the online experience. While smartphones received a DSI sore about 58, laptop (59) and tablet (59) users are a step above, followed by desktop users with a score of 61. Those using more than two devices are the most satisfied.

Thank you for the comments and keep up the good work.