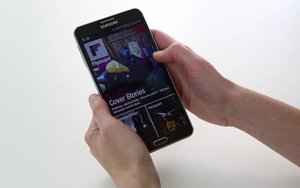 Flipboard, a mobile publishing app, is introducing vertical video ads to its platform this week.

Flipboard’s retooled Cinema Loop ads show a teaser clip essentially as a GIF in vertical format and link to a horizontal version of the ad. The original horizontal teasers drove a 20% higher completion rate, according to Flipboard, and they expect vertical teasers to do even better.

Vertical video has been much maligned since the advent of mobile phones. But it has started to appeal to many advertisers because it fits the orientation that most people hold their phones in the majority of the time they are using them.

This means advertisers need to specifically produce or edit ads for the new format, and because of this, they drive a premium price.

Snapchat popularized the format last year after showing that vertical videos could drive positive bumps in KPIs. Mobile viewers tend to engage with ads when they aren’t required to shift the orientation of their phone just to see it clearly.

As the format gains popularity, more inventory will be available, which will most likely help ease the costs associated with it.