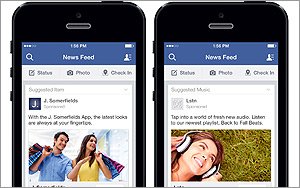 Facebook's move toward paid advertising requires the site to have a strict quality score, similar to Google and Bing. The social site wants to make one thing perfectly clear: Publishers cannot lure visitors to their site with misleading headlines. The move should weed out the undesirable spam and replace the newsfeed with higher-quality content.

For the largest media company in the world, business momentum remains positive, according to Baird Equity Research Senior Analyst Colin Sebastian. "Facebook and Google are now splitting roughly $3 out of every $4 of online advertising growth," he wrote in a research note published in late July.

The industry defines "clickbait" as baiting the click-through to the article with a headline similar to Facebook's example "The Dog Barked At The Deliveryman And His Reaction Was Priceless."

While Facebook defines clickbait as withholding necessary information and misleading the reader's expectations, the subjective nature of some headlines, unless blatant stated like the example above, makes it incredibly difficult to measure, especially through algorithms.

The social site wants publishers to value Facebook as an organic and a paid source of revenue, similar to search engines, which requires much stricter quality standards and guidelines.

Freitag said Facebook's algorithm, predominately based on bounce rate, measures the amount of times people visit sites and click off them, and then use that to determine the quality of the article. Any news article getting a lot of bounces from the pages displayed in the newsfeed gets reduced visibility.

Facebook addicts frequently check their posts and newsfeed. eMarketer reported Friday on a study published by Coupofy that looks at how frequently U.S. Millennials check their smartphones. The findings reveal 20% of respondents checked their smartphones at least 10 times per hour, and a quarter of them said they did so at least once every 15 minutes.

In another survey from CivicScience, more than three-quarters of 13- to-24-year-olds said they were "addicted" to their digital devices, which included computers and smartphones. Self-declared device addiction among the 13- to-24-year-olds was more than double that of users ages 55 and older.

For the largest media company in the world, business momentum remains positive, according to Baird Equity Research Senior Analyst Colin Sebastian. "Facebook and Google are now splitting roughly $3 out of every $4 of online advertising growth, he wrote in a research note published in late July.