HBO 'Hitchcock/Truffaut' Documentary Needs More Of Them, Less Of Others 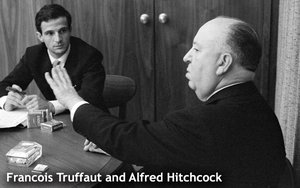 The title of the HBO documentary “Hitchcock/Truffaut” implies a film version of the famous book of the same name first published in 1966 from the interviews Francois Truffaut conducted with Alfred Hitchcock in 1962. Like the book, the documentary you would expect would perhaps have the voices of Truffaut asking his questions in French (and then having them translated by the third party to these interview sessions, interpreter Helen Scott) and then Hitchcock giving his answers juxtaposed with clips from the movies they are discussing.

The makers of this documentary apparently had access to the audiotapes that were recorded during this week of interviews in Hollywood. And they also seem to have obtained the rights to use clips from as many Hitchcock movies as they needed.

But despite this seemingly ample supply of fascinating material, the makers of “Hitchcock/Truffaut” decided to conduct additional interviews with a number of other prominent directors who all get to expound on the Hitchcock style. Much of what they say is repetitive and unnecessary. It’s as if the makers of the documentary had no confidence that the Truffaut/Hitchcock interviews themselves would have been more than enough to carry this 80-minute film.

Instead you have a contemporary director such as Richard Linklater, for example, expounding awkwardly on Hitchcock’s mastery of time at a point in the documentary in which Truffaut and Hitchcock say essentially the same thing, and a lot more eloquently too.

“Hitchcock, in a way, was the master -- let’s say sculptor -- of moments in time to take you through a sequence or direct your perception in a way where he could elongate time or telescope it,” Linklater says listlessly.

“The visuals are so graphic and precise! There’s a lot to learn from that!” goes another shallow insight from director Wes Anderson.

“What he has to say in ‘Hitchcock/Truffaut’ resonates for me as a filmmaker,” Japanese director Kiyoshi Kurosawa informs us. This leads to two questions: Who cares? And who on Earth is Kiyoshi Kurosawa? (Feel free to leave a comment below about my evident lack of film knowledge.)

At the outset of the documentary (premiering Monday night), some of the directors are seen talking about the significance of the publication of “Hitchcock/Truffaut” on their lives and careers. So then, after they all make this point about the book’s importance, this documentary about that very book becomes clogged with these director interviews.

Even Martin Scorsese’s interview segments are unnecessary here, despite his infectious enthusiasm, prodigious knowledge and keen insights. With all due respect to him, this documentary would have been a lot better if it had relied solely on the enthusiasm of Truffaut and the insights of Hitchcock -- the two men it was supposed to be about.

To be clear, there is plenty of material from the original interviews. There’s just not enough of it. My own recollection of the book (I own two different editions of it) is that Hitchcock’s own analysis of his fears and daydreams was more than adequate to hold a reader’s interest.

But in the documentary, we have to have director Paul Schrader telling us that ropes, garrotes and other instruments of strangulation that appear repeatedly in Hitchcock films have “a Freudian weight to them.” And so, Paul Schrader is positioned as an expert on Freud.

Well, maybe he is. But that’s not what “Hitchcock/Truffaut” was supposed to be about. Let Paul Schrader, Martin Scorsese, Richard Linklater and the rest have their own documentary. None of their names are in the title of this one. So what are they doing in it?

film, tv
2 comments about "HBO 'Hitchcock/Truffaut' Documentary Needs More Of Them, Less Of Others ".
Check to receive email when comments are posted.
Read more comments >
Next story loading