Harry Potter took a long absence but returns in J.K. Rowling's "Harry Potter and the Cursed Child" -- which isn't a novel, but rather a rehearsal script for the play that just opened in the Palace Theatre in London.

The Cursed Child is billed as the eighth and last Harry Potter book, but critics don't feel as if it’s connected with the epic story that Rowling told during the prior seven novels.

Nonetheless, bookstores like Barnes and Noble are betting big on Harry Potter, buying up keywords with the release of the latest book, according to SimilarWeb.

Barnesandnoble.com experienced a spike in traffic on July 31 in the U.S. -- the day the book was released -- with more than 1.1 million visits. Now when querying "harry potter" the bookseller appears three times on the first page of google.com search results. It's the No. 1 keyword during the past 28 days that returns “harry potter and the cursed child book” linking to Barnesandnoble.com, pre SimilarWeb data.

Here are the numbers based on percentage: Barnesandnoble.com took 74.10% of the search traffic share, whereas amazon.com took 25.90%.

In organic search query results for the term "Harry Potter and The Cursed Child" during the past three months, Wikipedia made up 37% share of all traffic generated by these keywords; HarryPotterplay.com 16.03% of all traffic for these terms. 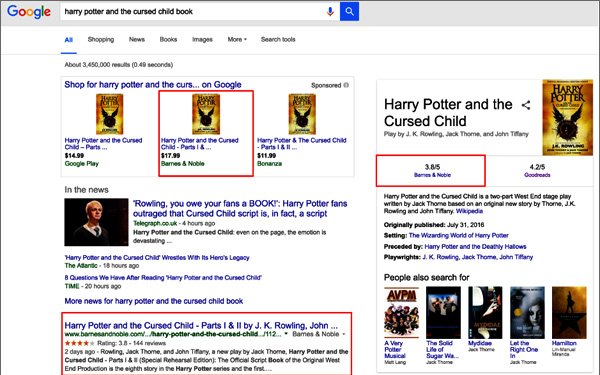