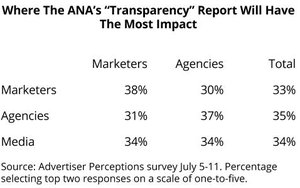 Two months after the Association of National Advertisers released its controversial agency media-buying “transparency” practices report by K2 Intelligence, most advertisers and agencies remain relatively unaware of it. Among those who are aware of it, there was a marked disconnect between marketers and agency executives about who would be most impacted by it.

These were some of the key findings of a survey of advertiser and agency executives conducted by Advertiser Perceptions in early July, a month after the ANA report was released.

Only a quarter (25%) of advertisers and about a third (32%) of agency executives responding to the survey said they were even aware of the ANA report.

Among those who said they were aware, the vast majority (72%) said the findings were about what they expected they would be. Ten percent said they considered the results better than they had anticipated, while 17% said they were worse.

Interestingly, the margin that considered the findings worse than expected was much higher for agencies (19%) than marketers (14%).

The survey also found a significant disconnect between clients and agencies in terms of where the greatest impact of the report may be. A higher percentage of marketers believe it will impact marketing organizations mostly, while a higher percentage of agencies believe it will impact agency organizations the most. Both clients and agencies were in lockstep in terms of the impact it will likely have on media suppliers.
agency, media buying, research
Next story loading