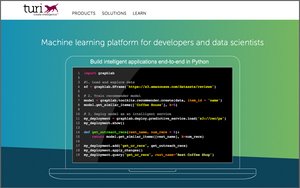 Turi is a Seattle-based company that has created a software platform for other companies to build apps that utilize machine learning and AI.

Customers have used the platform to build recommendation engines and fraud detectors, as well as apps that predict customer churn, run sentiment analysis, and segment customers. Companies like Google and Facebook use machine learning to speed up searches and classify images/facial recognition, among other things.

The company has raised $25.25 million in two funding rounds, the most recent in January 2015.

Seattle is apparently a hub for the burgeoning machine-learning industry, with several companies in the space headquartered there. Apple has been building up a presence in the Northwest — after buying Union Bay Networks in 2014, the company opened an engineering office in Seattle.

The CEO of Turi, Carlos Guestrin, is also the Amazon professor of machine learning at the University of Washington — a position endowed by Jeff Bezos, Amazon’s CEO.

Turi originally was an open-source project at Carnegie Mellon that Guestrin headed up. The project followed him to Washington when he joined the faculty there and was subsequently spun off into its own company.

Apple has purchased other similar machine learning companies in the past, including Perceptio and VocalIq, and will most likely continue to be actively engaged in M&A.