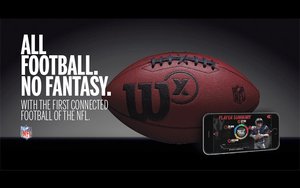 Wilson Sporting Goods plans to introduce its new smart football next month and is timing the introductory ad campaign to the NFL season kickoff. Seattle Seahawks quarterback Russell Wilson, a member of Wilson's advisory staff, will appear in some of the videos “and will play an important role in helping educate our Wilson X quarterbacks on how the ball works,” says a spokesperson for the Chicago-based sporting goods company.

Wilson, which first previewed the smart ball around the time of the Super Bowl, already generated a lot of buzz with its smart basketball, introduced last September.

The spokesperson says the marketing campaign, from Phenomenon in Los Angeles, is scheduled to break around Sept. 8th, with ads running in “social media, in-game mobile and console advertising, as well as on Google and Amazon properties.” (It just announced it’s taking pre-orders, and is running an explanatory video on its website.)

Like the basketball, the football connects to a smartphone app using Bluetooth technology and comes with a “wrist coach” that holds a player’s phone on the non-throwing arm. The app tracks how far the ball is thrown, spin rate, spiraling efficiency and whether or not the ball is caught. They can share their scores on social media, and see how they compare to others.

The ball sells for just under $200 and is powered by a battery the company says lasts for about 500 hours, or an estimated 200,000 passes.

Experts say the launch is just the latest in the rapidly growing field of connected fitness. “These are a little different than fitness wearables or smart garments, and offer analytics that help both coaches and athletes,” says Angela McIntyre, an analyst who follows wearables and connected devices for Gartner. And she says that while companies like Catapult Sports, which use connected devices to help measure risk and readiness, are targeting professional and elite athletes, the Wilson product is a little different in that it’s aimed at the high-school and younger market. (It comes in a junior size, as well.)

Gartner estimates that this year, there are 224.1 million installed IoT units in the health and fitness category, which it expects to grow to 276.3 million next year, and 337.7 million in 2018.

Next up, Wilson is working on smart balls for both golf and baseball. “For sports to continue to be rewarding and enjoyable, we have to reimagine how they’re played,” the spokesperson says, “so we can create these very different and unique experiences. We’re trying to motivate kids to get out and play more with products that connect how they live their lives today.”