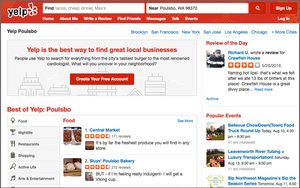 During Yelp's Q2 2016 earnings call Tuesday, Charles Baker, CFO at Yelp, called out some international challenges. "We're trying to unlock additional distribution," he said. The company's executives feel encouraged by the 20% growth for the quarter in the U.S., but challenged by the slow international growth.

Yelp management has talked "pretty openly about how Google made our life a little bit more difficult," starting a couple of years ago. The company has seen "real change" when it comes to international traffic growth, Baker said, but it's not good enough. "We have some focused efforts there to try and unlock more," he said.

It's not clear whether Google continues to negatively impact traffic to Yelp, but growth from unique visitors fell 1% year-over-year in the quarter, compared with a sequential 2.5% rise, which Raymond James Analyst Aaron Kessler attributes largely to weaker desktop traffic.

Analyst consider Google search changes a "price catalyst," which mean an event that causes the price of the stock to move. Tom White, analyst at Macquarie Securities, rates "Google search changes" right up there with the company's earnings results and product innovation, according to a research note published Wednesday.

During the earnings call, Yelp said that to drive broader awareness, the company's testing and measuring TV, online video advertising, and direct marketing before it makes a "sizable investment," according to Jeremy Stoppelman, co-founder and CEO. He said that during the second quarter tests began to show lifts in more than a dozen different metrics.

Another priority for 2016 is Yelp's core local advertising business. The company has been investing in business owner tools in sales and account teams. The results from these efforts during the last year has generated more than $500 million in local revenue and grew the company's base of local advertising accounts by 32%.

Stoppelman gave examples of domestic growth, but none internationally. In the U.S., the Regal Entertainment Group, one of the largest cinema operators in the U.S. began advertising on Yelp last year. He said the cinema group has experienced "dramatic" increases in Web site traffic and high converting leads, but offered no hard numbers.