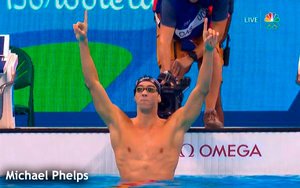 We have evidently produced a race of superhumans.

They and their exploits were on view Tuesday night on NBC. And it made for magical, mind-boggling TV. I’m talking, of course, about the U.S. women gymnasts and the men’s swimmers, led by Michael Phelps.

He won his 21st gold medal -- one of those sports records that will be so difficult to surpass that few of us alive today stand a chance of seeing the next athlete to achieve this in our lifetimes.

The four members of the team that won the gold medal in the 200-meter (x4) freestyle relay Tuesday night -- including Phelps -- were a wonder to behold both in and out of the pool. And the women gymnasts: Is there anything they can’t do? You half expected them to leap in the air and just keep going, like characters in a superhero movie.

Yes, Tuesday night was the night I finally got into the Olympics. It happens this way with every Olympics. In the beginning, I’m almost never interested in them. Then, after several evenings of fruitless grazing for something else to watch, I finally check out NBC and if there’s a “marquee” sport on at the moment -- such as swimming or gymnastics (plus a few others such as boxing and any number of running events) -- then that’s where I’ll stay for a while.

On the other hand, sometimes when I tune in to the Olympics, they’re showing Beach Volleyball or some other sport I have no affinity or affection for, and off I go to look for something else.

Generally speaking, every other network (the few not owned by Comcast/NBCUniversal) has decided to take a backseat to the NBC-owned platforms for the duration of these Olympics, in which we are now only in the first week.

So the Olympics telecasts have the television field more or less to themselves for two weeks. An individual viewer, however, has no ability to find, watch and process more than a fraction of it all, unless he or she is surrounded by screens -- first screen, second screen, third screen and ad infinitum.

And so, we regular people tune in and out. And most of us probably do this during the prime-time hours, although there are Olympic events airing all day on the NBCU networks -- from MSNBC to USA.

Here is where I give my quadrennial excuse for not going into critic mode and picking apart the Olympics telecasts like so many other TV critics do. Sure, we can all nitpick about this or that comment we heard from some NBC commentator. Or we can take issue with a line of questioning Bob Costas pursued in some interview. Or maybe you don’t particularly care to stay tuned into “The Today Show” when Matt Lauer and company are learning to samba.

All of this makes for valid criticism from a personal point of view. But to me, the Olympics telecasts are so wide-ranging and so darn big that the event defies a critic’s effort to assess it all.

And what would be the point anyway? I have written something like this during what seems like a dozen or more Olympics that have come along during my career as a TV critic. And that is: The Olympics telecasts are miraculous. On that basis alone, they should be appreciated, and also enjoyed -- depending, of course, on one’s personal level of interest in the various Olympic sports.

There is much about the Olympics – both the Games themselves and the telecasts that are bringing them all home -- to admire and amaze. For me, the Olympics fulfill television’s most basic promise more than any other live, televised event. And that promise is: To marshall all of the best available minds and technology -- at great cost and effort -- to bring you to a place far away where you cannot otherwise go, and bring it all to you in a way that is, for all intents and purposes, flawless.

I formed this impression and opinion of Olympics telecasts long ago, when I was a young reporter and ABC was still the network of the Olympics. One day sometime in the 1980s, ABC p.r. invited a group of reporters to visit a vast warehouse on the west side of Manhattan where Julius Barnathan -- the legendary president of broadcast operations and engineering for ABC -- would take us on a tour that would show us the equipment that was then being organized and packed for shipping overseas for an upcoming Olympics.

This experience really knocked my socks off. And ever since, I have had a huge respect for the effort that goes into these things. It’s one reason why I cannot play the part of nitpicking critic where the Olympics are concerned. I’d rather just enjoy them.

events, olympics, sports, tv
1 comment about "Best Way To Enjoy Olympics Is Watch Them In Your Own Way ".
Check to receive email when comments are posted.
Next story loading