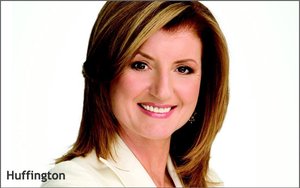 Arianna Huffington, founder and namesake of The Huffington Post, is leaving the company to lead a new health and wellness startup called Thrive Global, according to The Wall Street Journal, which first reported the news Thursday.

The new startup is not a media company, but will instead focus on helping companies improve the lives of their employees through collaborative efforts and workplace initiatives.

Under the terms of her most recent contract with AOL, signed in June 2015, Huffington will continue serving as president and editor-in-chief of HuffPo through 2019, but the agreement also allows her the freedom and flexibility to launch the new venture, the digital media impresario tells the WSJ.

After her current contract expires, she will leave HuffPo to manage Thrive Global full time.

Rising to fame as a political commentator in the 1990s, known for brusquely witty analysis delivered with a distinctive Greek accent, Huffington co-founded her eponymous site with Kenneth Lerer and Jonah Peretti in 2005. It soon become one of the most successful pure-play Internet publishers.

It was later sold it to AOL for $315 million in 2011 — then a record-setting amount for an Internet-only publisher.

Peretti went on to co-found BuzzFeed in 2006; Lerer is a backer of Thrive Global through his fund Lerer Hippeau Ventures, along with other investors like Advancit Capital, Blue Pool Capital, Greycroft Partners and Facebook billionaire Sean Parker.

Subsequently, Verizon’s acquisition of AOL last year raised questions as to Huffington 's status with the company, reinforced by her own announcement several months ago of her interest in starting a new business.

HuffPo is widely hailed as a pioneer in digital publishing. The nine-figure valuation attached to the site in 2011 set the stage for subsequent investments of similar magnitude.