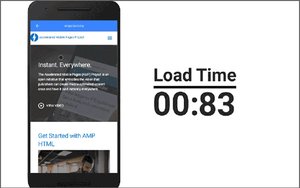 About 40% of consumers will leave a page that takes longer than three seconds to load -- and still, in July 2016 the average U.S. retail mobile site loaded in 6.9 seconds, according to Google data. It's no wonder that Google estimates that 40% of those navigating to a landing page from an ad will likely not bother continuing to the page and instead click away.

When an ad serves in a Google search result on an AMP Landing Page, the landing page loads in less than a second, allowing the user to navigate back to the content they were reading before clicking on the ad, according to a post by Vamsee Jasti, product manager of AMP Project at Google.

While early tests suggest the median load time for these pages is less than one second, Google introduced several ways to optimize the pages to improve the loading experience before the user even navigates to the landing page.

Other ways to speed up the process include the ability to deliver Google cache URL when available, and no redirects.