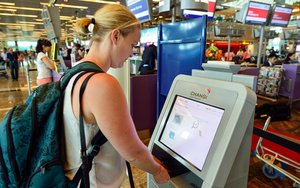 Half of Americans try to avoid airline personnel by using electronic and online alternatives, and Millennials (61%) are the most likely to favor this approach, according to new research from Mintel.

Apparently, consumers become more social with age. Beyond Millennials, less than half (46%) of Generation X say that they avoid airline personnel, as well as less than two in five (37%) Baby Boomers and just 30% of the WWII generation.

However, while flyers are busy hiding behind electronic devices, nearly half (48%) say it doesn’t matter if they have internet access in-flight. Nevertheless,  the majority of consumers (54%) say they would like to stream movies or TV shows while in flight, including some 80% of Millennials.

“Although automation in travel is the direction of the industry, companies can counterbalance technology trends by investing in the human element of customer service,” said Fiona O’Donnell, director of multicultural, lifestyles, travel and leisure at Mintel, in a release.

One-quarter (26%) of Americans have flown in the last each year. While technology continues to improve measures across the industry, 62% of Americans believe flying is getting to be more of a hassle, rising to 70% of the most frequent travelers. Despite the growing complexities of the flying experience, slightly more than half (54%) of consumers agree that they like flying, with just one in five (21%) in disagreement.

Proving the importance of price when it comes to airline selection, lower price is the top consideration by U.S. flyers. As many as two-thirds (65%) of flyers say they would choose one airline over another based on price. Meanwhile, flight times is the second most important factor (57%), while free baggage check (48%) rounds out the top three factors impacting airline selection. In contrast, only one-third (36%) of flyers select their flights according to loyalty program membership.

The majority of flyers are not particularly eager to earn loyalty rewards as just two in five (41%) try to fly with one particular airline when they can. Despite this, however, Mintel research reveals that overall enrollment in frequent flyer programs remains steady with an average of one in five (20%) U.S. adults enrolled in a frequent flyer program.