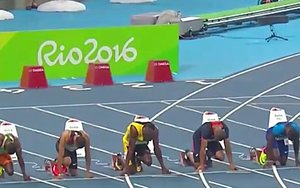 With more than half the Olympics events completed -- through 10 days of TV coverage -- NBC Television Network is still well behind in viewers compared to the London 2012 and Beijing 2008 Games.

The NBC broadcast network is down 22% in total average prime-time viewers to Nielsen 27.4 million through its second Sunday of Olympic programming from London’s 33.6 million. It is also lower than the 29.9 million in Beijing.

NBC says this change can be partly attributed to the shifting among viewers to digital platforms.

Unlike the London games, the Rio Olympics have full live digital streaming of all sports events as well as competing Olympic coverage on NBC cable channels. NBC says there is record high viewership and social media activity on digital platforms with the Rio games.

Of its $1.2 billion in advertising time sold to the advertisers before the event started, and NBC says 75% is in prime time. NBC says it is on pace for the Rio Olympics to become the most profitable Olympics ever.

Overall, TV sports programming has maintained a high price premium for advertisers versus that of other TV content -- and especially with live sports.