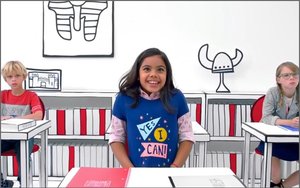 While Target impressed observers with better-than-expected profits for the quarter, sales fell for the first time in over two years. That fall — a dip of 1.1% in comparable sales — came as a result of reduced traffic, causing the company to cuts its sales forecast for the second half of the year and vow to do more for deal-focused shoppers.

CEO Brian Cornell promised investors that the Minneapolis-based company is “committed to restoring positive sales growth in the quarters and years ahead.”

In a conference call that was webcast, Cornell made repeated references to “rebalancing the messaging… . We are best when we balance both ends of our brand positioning,” he said. “We have got to deliver on the ‘Expect More’ component. And I think we have done a sensational job there.”

But he added that it needs to step up the emphasis on the “Pay Less” component. “That’s all about those core household essentials that we have to make sure are presented effectively in store, in our circular, on our end caps to our guests each and every week.”

Sales of groceries — an area the company has singled out as particularly essential to its growth — were disappointing. “We clearly have more work to do to unlock the potential,” he says, adding that the company was re-evaluating its efforts, including assortments. “We are rebalancing our messaging and promotions, to reach consumers intently focused on value.”

Electronics were also a weak spot, declining in double digits with sales of Apple products down a steep 20%. And pharmacy sales were also softer, as the company continues its transition from Target to CVS pharmacies.

Clothing sales were stronger, however — particularly for women — as well as in the launch of Cat & Jack, the kids’ line on its way to becoming the store’s biggest private label. And digital sales gained 60%.

Total sales fell 7.2% to $16.2 billion from $17.4 billion last year, which includes the removal of pharmacy and clinic revenues, as well as the decline in sales. Net earnings fell 9.7% to $680 million.