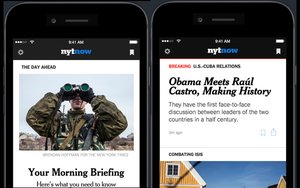 The New York Times is shutting down its NYT Now App, a free app dedicated to curating a list of the day’s top news stories in an effort to attract a younger, mobile audience.

The app will no longer be available to download by the end of the month.

The Now App was “among the first attempts by the Times to enhance its appeal to mobile users as it looked for new revenue sources that would offset drops in print advertising and circulation,” according to The Times.

Kinsey Wilson, EVP, product and technology, said the newspaper will instead put its “energy and resources” into its main app and will look to third-party platforms, like Facebook and Twitter, to reach younger readers.

Features of NYT Now -- such as bulletted-point lists and briefings -- have been steadily incorporated into the Times’ main mobile app.

Originally, the subscription price for NYT Now was $8 a month, about half the price of the least expensive digital subscription for the newspaper. But last year it became free, likely a harbinger of the eventual demise of the app.

This isn’t the first of the Times’ apps to shut down. In 2014, NYT Opinion was closed. The only two remaining apps aside from the Times’ core one are the popular free food app NYT Cooking and The Scoop, a Times' guide to New York.

In general, apps have a tough time attracting loyal users.

As Publishers Daily previously reported, a recent AOL study found that audiences spend over three hours a day on mobile in the U.S., with 87% of that time in-app. But the average person spends 79% of their time in just five apps.