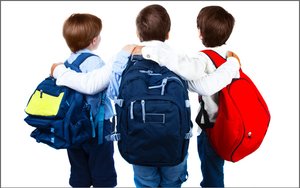 As retailers head into the home stretch of the back-to-school season, it looks like parents may be cutting down on spending, with new reports from the National Retail Federation and Brand Keys showing some sluggishness.

The National Retail Federation, which last month forecast a hefty 9.6% increase in back-to-school buys for families with kids in kindergarten through high school, now says consumers have been slow to reach the cash register. As of early August, just 48% had finished half their shopping, down from 50% last year. And 22% percent hadn’t even started, compared to 20% last year. The Washington, D.C.-based trade association chalks the lollygagging up to concern about price and value.

With total spending expected to reach $75.8 billion, according to the NRF, up from $68 billion in 2015, back-to-school is a major event for many retailers. But it takes on the added importance of being a harbinger of what to expect from consumers as they shift into the all-important fourth quarter, with its big-spending holidays like Halloween, Thanksgiving and Christmas.

And Brand Keys, the New York-based brand loyalty consultancy, is forecasting even slower spending. In its research based on 7,500 families, parents say they will spend just 3.9% more than they did last year, with an average outlay of $675. While they didn’t come right out and blame the economy, 73% used words like “uncertainty,” “anxiety,” and “unpredictability.” Brand Keys says people cited the looming Presidential elections (58%) as well as income distribution (47%), crime (44%), and unemployment (30%), as well as race relations (22%) and a general feeling of insecurity related to terrorism (19%). “Apparently, it’s not just consumer confidence in the economy,” says Robert Passikoff, founder and president. “It’s a lot more than that.”

While 99% of parents plan to do some shopping online and 98% will hit the discount stores, the survey also detects channel changing as people look harder for better prices, more selection, and an easier way to get through their lists. Plans for department store shopping (up 10%), office supply (up 5%) and online all gained, with respondents planning to decrease their spending at discount stores, specialty retailers and catalogs.

In terms of where they intend to make physical purchases, Walmart pushed Target out of the No. 1 spot, followed by Target, a tie between CVS and Walgreens, Best Buy and Macy’s. For e-tailers, the top five are Amazon, Walmart, Apple, Target and Staples.