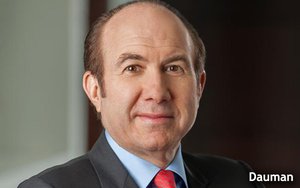 The fight for Viacom has ended -- with the Redstone family winning control over Philippe Dauman, the embattled chairman/CEO of Viacom, who is on his way out.

Thomas Dooley, Viacom’s COO, will become the interim chief executive officer through Sept. 30 -- and could be named permanent chief executive -- as part of an approving settlement by the Viacom board on Thursday.

Dooley will work with the Viacom board to develop a new strategic and financial plan for the company. He is a longtime Viacom executive, who started in 1980. He is a member of Viacom’s board since 2006.

Thomas May, chairman of Eversource Energy -- who was proposed as a new director of the Viacom board back in June by National Amusements, the Sumner Redstone-controlling company of Viacom -- is expected to be named chairman of Viacom, according to reports.

Dauman will depart with a total severance package valued at about $72 million. And as part of the settlement, Viacom will now have a changing and  enlarged board of directors of at least 15. Five veteran board members will be departing this year.

Sumner Redstone is chairman emeritus of Viacom, the 93-year-old mogul who controls both Viacom and CBS. He and his daughter Shari Redstone, a Viacom and CBS board member, won out over Dauman after months of a highly public corporate battle to control the company.

Shari Redstone has been a key decision maker in the long-term battle, according to sources.

One major bone of contention that the Redstone Family had with Dauman's direction of the company included his push to sell a large 49% minority stake in Paramount Pictures. Part of the agreement also means Dooley will be able to present a plan to the board for that to happen.

Viacom has seen its stock price sink sharply -- nearly 50% -- over the two years, due to poor TV advertising results from its networks and mediocre results from its Paramount Pictures unit.

Viacom’s board met on Thursday and approved a settlement ending a number of lawsuits both sides began.