You Hate Me, You Really Hate Me

Gallup, as they are wont to do, asked just a shade over 1,000 Americans if they had positive or negative views of various industries. After some voodoo math (subtracting the negatives from the positives), it turns out the highest ranked industries were restaurants, computers and groceries. At the very bottom, unsurprisingly, were the federal government and pharma. As usual, advertising and PR ranked near the bottom, sandwiched between banking (which they like more) and oil and gas (which they like less). Oddly, we ranked well below the usual punch-liners of telephone and auto (reminding me of that great advice about how to avoid a cocktail party conversation by replying to the question, "What do you do?," by saying, "I work for the telephone company."

Since there was no breakout between fast-food and the new normal of $150 dinner-for-two-tab restaurants, it is a little hard to believe that everyone is so happy about eating out. Especially since not a day goes by that we don't see stories about the amount of fraud in the business, such as seafood sold as red snapper, but served as cod, or that farm-to-table dish that arrived on a freezer truck that delivers to every other joint in the city. And what about $18 appetizers and $36 main courses (not to mention $14 salads and $12 desserts)? You'll need a home equity loan if you order wine.

While I have a couple of foodie friends who adore such claptrap, I find it annoying to hear the history of where my food came from or what special thing the chef will do to it. Especially when the server acts like he/she is having transcendent moment when they say "infused" or "reduction."

It was not many years ago that -- thanks to the dreaded phrase, "Let me put you on hold while I talk to a higher level specialist" -- the computer industry was hated by everyone. This of course was pre-smartphone so everyone HAD a desktop computer and sooner or later had to make that call to some guy in the subcontinent who after saying, "thank you for calling, my name is Ishmahsalinexinsatahad, how can I help you?" was of NO help whatsoever. And you bought an upgrade every time Intel hit a newer processor benchmark or the hard drive exceeded yours by a couple hundred gigabytes (although you never in your life filled up any hard drive).

The only way groceries made it that high up was because they clearly did not ask anyone who has a Whole Foods in their towns. End of story.

It is hard to fathom which part of the advertising industry folks seem to hate the most. Endless and frequent ad pods that turn 42 minutes of drama into an hour-long session reminiscent of the “Clockwork Orange” scene where Alex DeLarge has his eyes propped open,

forced to watch screen images. Or that four months after deciding not to buy the red shoes that ads for them STILL turn up online because you are the only person left on the planet not to have an ad blocker in your browser. For me, it is radio advertising, but I am sure you have your own demons.

Ever since Jack Lemmon drank his way to the bottom, the PR industry has always been characterized as slicksters trying to pull a fast one over on an unsuspecting (yet oddly fast-talking, know it all) press or public. Every egregious screw-up by everyone from presidential candidates to Olympic swimmers is labeled as a "PR" problem, so there is no escape from the netherworld for this industry.

As a sign above my desk reads: "In the PR game, the days are tough, the nights are long and the work is emotionally demanding. But it's all worth it, because the rewards are shallow, transparent, and meaningless." 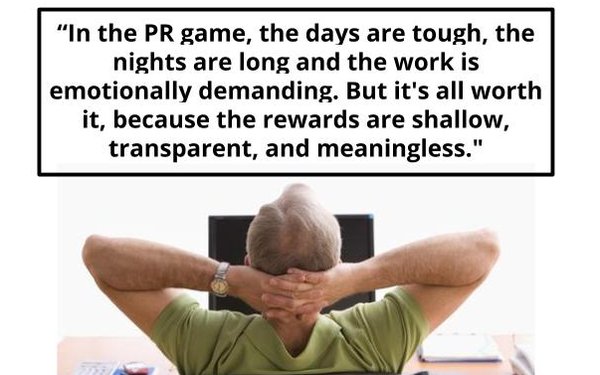