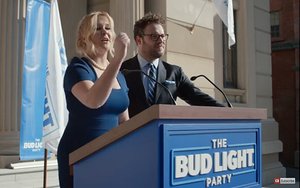 Bud Light is enlisting comedians Amy Schumer and Seth Rogen in a third ad since the duo first appeared in creative during a Super Bowl spot.

The spot, “Labels,” is from Wieden+Kennedy, and continues the brand’s mission to bring people together over beer. The ad supports “everyone’s right to be whoever they want to be, labels free.”

The spot shows Schumer and Rogen campaigning on behalf of “The Bud Light Party.” It highlights how all Bud Light drinkers are the same, noting that gender identity is a spectrum and no matter where you fall, everyone sits on barstools.

“Gender identity is really a spectrum,” Schumer says. “We don’t need these labels.” Rogen adds: “Beer should have labels, not people. We don’t care, we’ll sell you beer.”

“We’ll sell you beer any day of the week,” Schumer says.

Previous executions in the campaign featured Schumer and Rogen celebrating gay weddings and cultural diversity. The latest spot continues to use the “Raise One to Right Now” tagline.

“From the start of our campaign at Super Bowl, The Bud Light Party has rallied around bringing people together,” said Alex Lambrecht, vice president of Bud Light, in a release.

The campaign is being promoted with the hashtag #BudLightParty.

Bud Light is the top-selling U.S. beer brand, but its sales volume has declined 12% since InBev acquired Anheuser-Busch in 2008, according to MarketWatch.