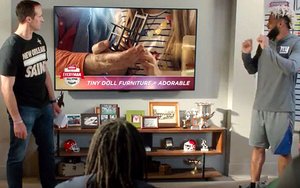 With regular football season nearly upon us, both Jack Link’s jerky and Campbell’s Chunky soups are out with new TV/video creative featuring NFL stars hamming it up in goofy scenarios.

Jack Link’s has tapped the Green Bay Packers’ Clay Matthews and the New York Giants’ Odell Beckham Jr. to work out with the brand’s Sasquatch mascot in a video series that parodies the workouts so popular on VHS tapes in the ‘80s.

The concept: To demonstrate how Jack Link's can help regular human beings “achieve ultimate musclefulness," said the brand’s CMO, TD Dixon. The message isn’t subtle: In each video, the players describe Jack Link’s as “the protein-packed snack packed with protein” before the brand’s “Feed Your Wild Side” tagline pops up on screen.

In one of several 30- and 15-second spots from Carmichael Lynch, which is also the brand’s media agency, Sasquatch has Matthews pumping fish in a move called “pike presses.” Matthews helped launch the beast’s football career a year ago in a four-part Jack Link’s video series.

In another new spot (below), Sasquatch takes Beckham through moves that include salmon swings, beaver squats and yoga. All of the videos released today can be viewed on the brand’s YouTube channel.

The jerky brand’s significantly beefed up marketing budget will allow for running the spots on television networks including ESPN, NFL Network, Adult Swim and Comedy Central.

On the Web, the videos will also be seen on Hulu and Deadspin, among other platforms, as well as on Jack Link’s’ Web site and social channels.

Beckham is also among the NFL players featured in Chunky’s new creative, from Y&R New York, celebrating regular guys.
Instead of the players’ moms showing up in unexpected settings with bowls of Chunky, as in the brand’s highly successful “Mama’s Boy” campaign, which ended two years ago, this time Beckham and five other NFL stars are running a secret fantasy league where they draft regular guys for the “Everyman All-Star League.”

In a 30-second spot that debuted today, the other players grouse that Beckham gets first dibs on an everyday guy named Mitch Greenwald, who’s “a welder, a volunteer fireman, and he makes tiny doll furniture for his daughter.”
The brand, an NFL sponsor for nine years now, first introduced the new campaign concept in a spot launched on July 22. That video is already showing nearly 5 million views on YouTube alone.

Also today, Campbell launched a sweepstakes tie-in in which guys can create their own Everyman All-Star cards, get on a team and register for a chance to win Super Bowl LI tickets, autographed gear and other prizes.

In addition to warmer-than-usual winter weather, Campbell Soup Co. president and CEO attributed a 5% decline in U.S. soup sales and 13% decline in ready-to-serve soups in its fiscal Q3, ended May 1, in part to poor marketing execution for the Chunky brand. “We had a lack of compelling advertising,” she said. “We didn’t leverage our partnership well with the NFL.”

But the good news, she said, was that Campbell was actively addressing those issues, and that that “if we keep supporting this core (ready-to-serve soup) business and we get our act together on Chunky, we'll be in pretty good shape going forward.”