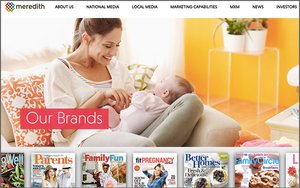 Crowe will be responsible for the marketing of all Meredith media products to consumers. He will also focus on overseeing subscriber acquisition and retention efforts, as well as lead digital media marketing efforts like search engine and email marketing.

Crowe will be based in Meredith’s headquarters in Des Moines, Iowa, and report to Andy Wilson, SVP of consumer revenue.

Previously, he was VP, COO and general manager at Hallmark Data Systems, an Ebsco Company that offers B2B publishing and services.

Before that, Crowe spent 15 years with Time Inc. He was VP of consumer marketing and in charge of customer acquisition for 20 Time Inc. titles. He also oversaw consumer marketing for Time Inc.’s Southern Progress Division, a collection of seven brands including Southern Living, Cooking Light and Coastal Living.

Earlier this month, Meredith announced a series of senior leadership promotions in its National Media Group marketing, sales and digital departments. The company promoted Tom Harty to president and COO of Meredith Corp.