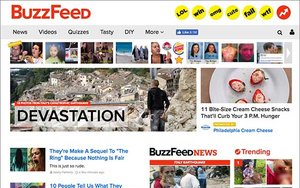 BuzzFeed has announced that it will divide itself into two departments: BuzzFeed News and BuzzFeed Entertainment Group. The company also doubled down on its commitment to produce more video across its verticals.

The health and video news teams will be integrated into BuzzFeed News, which will be run by Ben Smith, editor in chief of BuzzFeed.

In a memo to employees, CEO Jonah Peretti said the new structure will encourage multiple departments to work on video, instead of having just one dedicated video team.

“Having a single video department in 2016 makes about as much sense as having a mobile department," Peretti wrote.

He added: "As digital video becomes ubiquitous, every major initiative at BuzzFeed around the world will find an expression as video… Instead of organizing around a format or technology, we will organize our work to take full advantage of many formats and technologies.”

Peretti said video will “expand and embed” across the organization.

This may sound like BuzzFeed is preparing for a possible spinoff of its News department and focusing more heavily on its Entertainment content. But according to Vanity Fairy, Peretti claims he can make both entities successful, employing a similar business strategy Ted Turner used to form TBS and CNN.