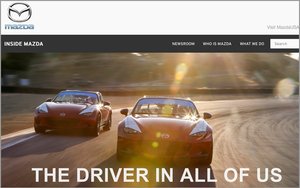 Mazda has created a new video that shows how motorsports is the ultimate expression of the joy of driving.

The 180-second film is meant to be “a tribute to the driver in all of us,” according to the automaker, whose tagline continues to be “Driving Matters.”

Created by The Garage Team Mazda, the film is modular. Each interview can act as stand-alone content. The intent is to re-purpose the individual stories and use them to go even deeper, and there may be further executions in the future, says Garage Team Mazda Chief Creative Officer Harvey Marco. Print work will support the video in relevant publications.

The agency filmed at the 24 hours at Daytona and then went to Road America. Both the professional side and amateur sides of racing were covered. A studio was set up in the basement of the ticket stand at Road America and nearly 100 people were interviewed.

“We also captured the races and grabbed scenes from around the track,” Marco says. “We met people from all walks of life, young, old, professionals, students, veterans. From that we were able to weave a poignant story that dimensionalized the sport.”

“With this piece, rather than focus on technology we can develop on the race track or showcasing specific cars, we want to illustrate the passion that drives motorsports participants at all levels — a passion we share,” Marco says. “The love of driving and racing is a common bond we have with Mazda owners and this piece is a nod to all of those who spend long hours and their own money to pursue this shared passion.”

The intent was to create an authentic story that honored the sport and the people who love it.

The story of racing, especially grass roots racing, is synonymous with Mazda. It takes decades of being at the track to really understand the depth and diversity of racing, he says.

Since launching Aug. 19, the piece has garnered earned media, but there is also a paid media plan behind this including a nationwide cinema run (shorts before the feature) during the month of September, he says.

“The folks in front of the camera in this piece obviously are passionate about their motorsports and it shows,” Marco says. “What is just as important though, is that the team at Mazda and its agencies built this out of our love for driving and racing too. There was very little convincing to be done with this project - it just felt right from the beginning and the reason is it tugs at our heartstrings just as it does with the featured racers. At our core, we are racers.”