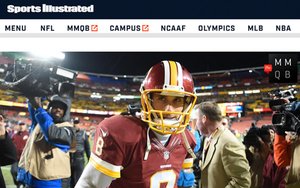 The multiyear partnership will also create a joint digital sports network that has yet to be named.

Both companies will retain independent editorial control, but Fox Sports and SI (part of Time Inc) will share content related to sports, such as the NFL, international soccer, MMA and college football.

According to TheWall Street Journal, the ad sales units from Sports Illustrated and Fox Sports will be able to sell advertising across their properties.

This joint network is now the second-largest sports publisher, behind ESPN. The digital properties owned by both companies have around 70 million unique visitors per month, according to comScore.

Sports Illustrated and Fox Sports will combine their comScore Web traffic under a single network. It will be considered part of Time Inc.’s overall traffic, a process called “traffic assignment.”

Times have been tough for magazines. Earlier this month, Time Inc. was planning to lay off more than 100 people; five people were recently let go at Sports Illustrated, WSJ reports.