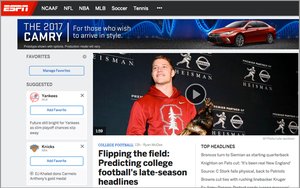 New York Giants defensive end Jason Pierre-Paul, who lost a finger after a fireworks accident, can proceed with a lawsuit accusing ESPN of violating his privacy by posting a screenshot of his medical records, a judge has ruled.

The legal battle dates to March, when Pierre-Paul sued ESPN and journalist Adam Scheffer in Florida. Pierre-Paul alleges that ESPN and Scheffer violated his privacy, and also violated a Florida medical privacy law.

As with Hulk Hogan's well-publicized dispute with Gawker, the battle over Pierre-Paul's medical records raises questions about when a public figure's right to privacy trumps a media company's right to publish truthful information. Hogan won a $140 million judgment against Gawker for violating his privacy by publishing excerpts of his sex tape; Gawker is currently appealing.

Earlier this year, ESPN asked Cooke to dismiss Pierre-Paul's lawsuit on the grounds that it has a free-speech right to publish information about matters of public concern. The company also said it's protected under Florida's anti-SLAPP (strategic litigation against public participation) law, which aims to protect free speech. That measure prohibits people from bringing lawsuits based on speech in connection with public issues, and says people who bring those cases must pay defendants' legal bills.

But Pierre-Paul countered that even if the amputation was a matter of public concern, his a photo of his medical records was not.

ESPN also argued that Florida's medical privacy law applies to health care professionals, not to the media. Florida's health care privacy measure imposes broad confidentiality requirements on doctors, hospitals and other professionals. It includes a provision that prohibits a "third party" who receives information in a medical record from disclosing it without the patient's consent. ESPN says that the term "third party" in the statute only applies to people who have the right to demand medical information -- like attorneys in lawsuits, people who work in poison control centers, law enforcement personnel and scientific researchers.