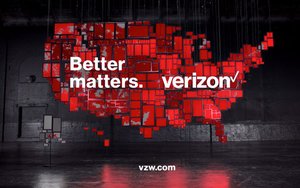 For years, Verizon has claimed it has a better wireless network than its competitors, and last year proclaimed “Better Matters.” Now, it claims that its “better” is even, um, better.

The wireless company on Monday launched its network improvement, LTE Advanced, which offers 50% faster peak speeds in more than 460 cities in the United States.  The LTE Advanced network uses software that combines multiple channels to increase network data speeds, and can be accessed by consumers who have one of 39 updated smartphones and tablets.

“While discount carriers talk about what they plan to do, we work every day to make  [our network] even better through technology,” David Bowen, Verizon’s director of marketing, tells Marketing Daily. “We build our wireless network for predictable excellence [which] means coverage, speed and reliability.”

Verizon introduced the improved network to the country with a new advertising campaign on Monday night. The spot leverages the company’s technological history, showcasing the Earth as viewed through a matrix of tablets, as a voiceover says: “This is not the land of ‘good enough.’” As the voiceover continues to talk about how Americans demand, “the best,” the spot demonstrates how Verizon was the first wireless company to offer 3G and 4G LTE service.

“Consumers demand the best. Not good, not second, not so-so. The best,” Bowen says. “Our new ad reminds consumers of Verizon’s history of delivering technological advancement – with 3G, 4G LTE and XLTE – and welcomes consumers to the next gen network.”

The commercial followed a teaser that aired during Sunday’s VMA awards on MTV. In that spot, actor Jamie Foxx (who has been appearing in Verizon ads touting the company’s network) portrays a cheesy lounge singer named “Ryan Stoan,” singing about how Verizon’s “best network just got better.”

“Jamie Foxx has been tremendously successful for us as of late, helping us to debunk competitor claims and confusion in the marketplace and remind consumers that there really is a difference in network quality,” Bowen says.

In addition to airing during the VMAs, Foxx touted the song on various social networks, moving it into a nationally trending topic. The company will continue to release content on social networks in the coming weeks, Bowen says.