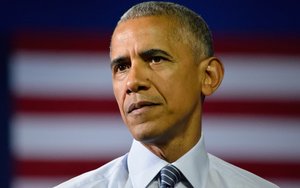 President Barack Obama is lined up to guest edit the November issue of Condé Nast's Wired magazine, marking the first time a sitting president will guest edit a magazine issue, according toWired.

President Obama has dabbled in publishing before. He wrote a powerful essay on feminism for Wired‘s sister publication, Glamour, for the magazine’s September issue.

The theme of Wired’s November issue, which will hit newsstands nationwide on Oct. 25, is “Frontiers.” The “completely bespoke” issue will be a departure from the standard magazine format, with new story forms and design elements, according to WWD.

“[President Obama] wants to focus on the future — on the next hurdles that humanity will need to overcome to move forward,” according to a Wired post announcing the presidential issue.

“We want to wrestle with the idea of how today’s technology can influence political leadership. Who better to help us explore these ideas than President Obama?” Wired Editor in Chief Scott Dadich said in the post.

The issue will be available available on select newsstands, Wired.com and tablet editions beginning Oct. 18.

The White House also announced a Frontiers Conference inspired by the Wired issue, which President Obama will host with the University of Pittsburgh and Carnegie Mellon University on Oct. 13.

“The conference will focus on building U.S. capacity in science, technology and innovation, and the new technologies, challenges and goals that will continue to shape the 21st century and beyond,” according to a White House statement.
magazines, politics, technology
Next story loading