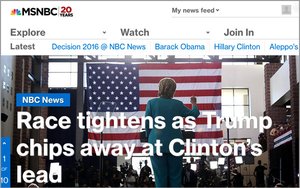 Although cable TV networks continue to reap overall benefits from this political election season, the big news cable leader got a bit of mixed news in August.

Fox News Channel -- still the overwhelming cable TV leader in terms of viewership -- was down 13% in total viewers in prime time to a Nielsen 2.08 million, also losing 29% in key 25- to-54-year-old TV news viewers.

A year ago in early August, Fox News aired the first Republican presidential debate, which pulled in a surprisingly strong 24 million viewers.

At the same time, MSNBC and CNN made major gains in the month, with MSNBC gaining 76% to 1.13 million prime-time viewers, and an 86% improvement in 25-54 viewers to 264,000. MSNBC topped CNN for the month in total average prime-time viewers.