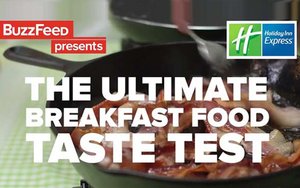 BuzzFeed is known as a native advertising/branded content machine, innovating on just about every ad format and platform there is. An earlier story  profiling BuzzFeed’s approach to native inspired a closer look at a campaign and case studies.

For the 2015 “Stay Smart” campaign, Holiday Inn Express sought to differentiate itself and break through the clutter. “We wanted target customers to take an action, engage with our content, read it, and share it with others. Ultimately we wanted people to visit our Web site and click through to make a reservation,” Freeman said.

Partnering with BuzzFeed “was a great way for us to stand out and be relevant.” The goal of the Holiday Inn Express campaign was to persuade people to taste its breakfast pancakes and to come stay at Holiday Inn Express, of course.

The target consumer -- ages 25 to 44, but also outside of that demographic -- was a “smart” traveler who’s self-sufficient, savvy, independent and wants to get a great night’s sleep, according to Freeman.

IHG discovered that breakfast was the most compelling reason that people were making decisions in the hotel category. “We had to stand out on breakfast. We have a one-touch pancake machine and people started posting and sharing videos with it,” Freeman said. The videos went viral.

“The Holiday Inn Express brand partnership with BuzzFeed continues to validate our belief in the importance of anchoring our campaigns in a strong cultural insight. [BuzzFeed] absolutely has its fingers on the pulse of what’s happening and what’s going to happen next,” Freeman said.

“From a native perspective, we focused on BuzzFeed as a distribution partner because it’s a great fit with our target audience, has great distribution, and has culturally relevant content.”

So Holiday Inn Express brand partnered with BuzzFeed to create two unscripted videos, "Real Artists Try Pancake Art" and “The Ultimate Breakfast Food Taste Test,” and four social posts. The goal was to deliver a message about the breakfast offering.

To date, the “Real Artists Try Pancake Art” video has received nearly 10 million views on YouTube and Facebook, more than 400% above the goals the brand set.

BuzzFeed conducted a research study with GfK to measure the impact Holiday Inn Express branded content had on users exposed to it. Brand lift is calculated as the difference between the control and exposed groups stated as a percentage. The Holiday Inn Express/ GfK research results revealed that the branded content drove significant brand lift in both favorability (17% increase) and purchase intent (11%).

“We were very pleased to see we had those lifts. They were directionally aligned with the sort of increases we saw with our compaign more broadly,” Freeman said.

In addition, in an effort to understand the creative and advertising effectiveness of the “Real Artists Try Pancake Art” video, BuzzFeed conducted an AceMetrix research study. The results showed that three out of four viewers were more likely to take action with sharing on social platforms, telling friends about the ad, or searching online.

On average, YouTube viewers watched nearly 90% of the videos, proving that the do-it-yourself, humorous theme resonated with viewers, and people actually were engaged with the content. “It performed well above our benchmarks and reinforces the impact of the content,” Freeman said.

In 2016, the campaign ran from March through July, and sought to build on in-room features. For example, there was a 360-degree virtual reality shower in which viewers can shower with the brand’s creative director, actor/comedian Rob Riggle. The video takes viewers on a tour of the Holiday Inn Express brand’s “Power Shower” and generated more than 2.5 million video views.

“The beauty of working with BuzzFeed is the content is still out there, and we’re getting a residual payoff on those views,” Freeman said.

“For us, native is really about the seamless integration of brands into culturally relevant content. The tone of the content has to align with the tone of the brand, or it will feel forced,” Freeman said. “We’ve had great experiences with BuzzFeed. They know how to develop great content and what their audience likes. And we seamlessly integrate our message into that content and ensure that it doesn’t feel like a one-off.”

This year, Holiday Inn Express has focused more on bite-sized pieces of content, "largely due to seeing what our audience has gravitated to. Comedy continues to be important,” Freeman said. The brand recently announced the second half of the campaign, which continues to highlight the brand’s breakfast offering with a  Pancake Selfie Express tour and a sponsorship of the Southeastern Conference (SEC) throughout football season.

As part of the brand's sponsorship with the SEC, football fans will see Holiday Inn Express advertising on the SEC Network and ESPN throughout the fall. The brand will also have an onsite ntegration on SEC Nation, the SEC Network’s traveling pre-game television show. The brand’s Pancake Selfie Express truck mobile experience will also be onsite each weekend throughout the fall on the college campus featured on that week’s SEC Nation broadcast. The truck is outfitted with five pancake machines, each producing one pancake per minute. Unique lasers then transfer selfies from smartphones to pancakes. From batter to platter, the entire process takes mere minutes, according to IHG.