Tribune Tower Is Sold For $240 Million 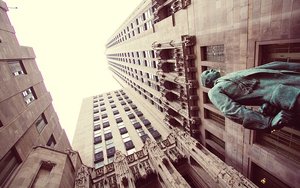 A historic transition is underway in Chicago, where the Chicago Tribune will eventually have to leave its namesake home, the Tribune Tower, following the skyscraper’s sale to a developer.

The 35-story building neo-Gothic tower, built in 1925, was sold to Los Angeles-based CIM Group by Tribune Media Co. for $240 million, in a deal expected to close by the end of next month. The building first hit the auction block back in October 2015.

Tribune Media received the tower during the division of assets when Tribune Co. split in 2014, and had been leasing office space to the Chicago Tribune, property of its former corporate sibling Tribune Publishing (recently renamed Tronc). Tribune Media also received the broadcast TV stations formerly owned by Tribune Co.

CIM plans to redevelop the tower, so the sale means that Tronc’s flagship newspaper, as well as Tribune Media itself, will have to find new digs at some point. However, the Chicago Tribune has a lease that runs through 2018, so management has some room for maneuver. It’s not clear whether the newspaper will stay in the Chicago downtown area or opt for the suburbs.

A number of big newspapers have given up their headquarters over the last few years. In July, The Boston Globe announced that it is selling its offices in Boston’s Dorchester neighborhood after almost six decades and moving back to downtown Boston.

In 2014, Freedom Communications, the previous owner of the Orange County Register, sold the newspaper’s headquarters in Santa Ana, Calif., to developer Michael Harrah for $27 million. Last year, the San Diego Union-Tribune sold its 13-acre headquarters in Mission Valley, Calif., for $50 million after it was acquired by Tribune Publishing. And back in 2011, McClatchy sold the Miami Herald’s headquarters for $236 million.