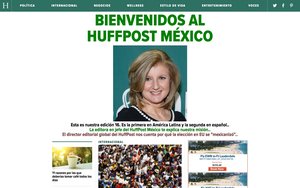 Arianna Huffington’s last act at as founder and editor-in-chief of The Huffington Post is the launch of Spanish-language site HuffPost Mexico.

HuffPost Mexico aims to create Spanish-language content targeting readers in Mexico and “to help the people of Mexico tell their stories themselves,” she said in a blog post published on the site.

According to Huffington, Mexico is the largest Spanish-speaking country in the world — the U.S. is second.

Originally, HuffPost Mexico was slated to launch in 2017, but the date was moved up to take advantage of the recent national attention on Mexico, due to comments made by Donald Trump, the Republican presidential candidate. Trump has committed to building a wall between the U.S. and Mexico and plans to deport 11 million immigrants, many of whom are from Mexico.

“There’s no better time than now to bring HuffPost to Mexico,” Huffington said in the blog. “At a time when Donald Trump is running on a platform that includes literally putting up a wall between the U.S. and Mexico, while calling Mexicans killers and rapists, it’s more important than ever to open up the conversation between our two countries, build bridges, and counteract this false and dangerous narrative.”

Politico reports the company will begin building a Spanish-language blogging platform, as well as a cross-post lifestyle and nonpolitical content from El Huffington Post, its Spanish edition that launched in 2012.

HuffPost Mexico's editor-in-chief is Laura Manzo. She previously oversaw the Mexican launch of InStyle and served as editor of the entertainment and lifestyle magazine Quién.

Huffington will move on to lead Thrive Global, her new health and wellness startup that will focus on helping companies improve the lives of their employees through collaborative efforts and workplace initiatives. She will not continue as president of HuffPost through 2019, as previously reported.