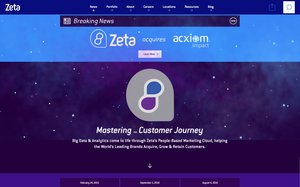 Zeta Interactive has secured another $45 million in funding.The marketing tech company co-founded by John Sculley, ex-CEO of Apple and Pepsi, and David Steinberg, Zeta CEO, plans to use the funds to finance more acquisitions, mostly in data and analytics.

This capital comes in combination with the closing of the company's recently announced acquisition of Acxiom's email services unit, Acxiom Impact, which expanded the company’s customer base and grew its percentage of long-term subscription revenue.

It arrives 14 months after Zeta raised $120 million from a consortium led by FS Investments and Blackstone’s GSO Capital Partners LP.

ETtech also reports that Zeta is looking to spend about between $10 million and $20 million in India to acquire companies.

With funds in pocket, Zeta can continue its acquisition spree.

During the past three years, Zeta has invested in extending and building out its SaaS-based marketing platform through the strategic acquisitions CRM division of eBay Enterprise, the marketing automation platform pioneer ClickSquared and the Actions division of Adchemy.

Analysts expect buyouts in the marketing tech industry -- some as high as those seen earlier this year -- to continue. Ones like Microsoft's acquisition of LinkedIn for $28 billion, or SoftBank Group acquisition of ARM Holdings for $32 billion.

While the trend of mega deals will continue, smaller ones also remain on the minds of execs with deep pockets, like Sculley and Steinberg, that support programmatic media buys.