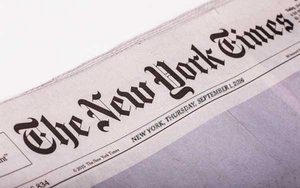 As part of The New York Times’plan to cut down on its local coverage around New York, the publication’s Metropolitan section has gotten rid of its regional theater, restaurant and arts coverage in Connecticut, Westchester, Long Island and New Jersey.

As of August 28, the Times has discontinued its local culture coverage in these regional areas around New York City.

Readers and subscribers in those areas will now receive the same Metropolitan section as readers in New York City. The New York Times' main Arts and Food desks will still cover events and news in and outside of the city.

According to a spokesperson for the Times, freelance contributors of these regional sections were informed of the change a month ago.

While this decision may seem fueled by economic pressures, it’s no secret the Times has suffered from dips in advertising revenue this year. Executive editor Dean Baquet previously said the company is revamping sections of the newspaper to better fit its national and global audience.

“What we discontinued had limited reader interest,” the spokesperson told Publishers Daily.

But locals will be hit hard by the cuts in coverage. Bram Lewis, artistic director of the Schoolhouse Theater in Croton Falls, New York, told Deadline that recognition from a Times review has jolted its box office with a 50% jump in sales, as well as attracted support in funding.

Ryan Sutton, the chief critic at food site Eater NY, told Deadline recommendations from the local Metro section “helped shape how Long Island eats. Every single Long Island restaurant worth its salt has a framed New York Times review hanging up in the foyer. Now millions of residents will have one less source of authority.”

Earlier this month, the NYT announced it was paring down its local coverage of New York. Broader subjects, such as policing, race and gender, will take precedence over individual stories about the New York community.

Times public editor Liz Spayd defended the decision, writing in her Sunday column on August 6: “Why should a newsroom that just announced lofty international ambitions spend resources covering news of no interest to readers in Beijing or London?”

In April, The New York Times Company announced it would invest more than $50 million over the next three years to expand its international digital audience and increase revenue outside the United States.
art, newspapers, theater, trends
Next story loading