Food marketing to Millennials can be a tough chore for even the best of companies. And for an old-line beverage brand, that may be a harder task.

That is what PepsiCo’s Lipton brand was up against -- the goal to reimagine its iced tea line, beverages and tea bags -- for a new generation of Millennial consumers.

Enter Scripps Network Interactive, home to Food Network, HGTV, the Cooking Channel, to come up with new ways of steeping younger consumers in the venerable brand. Not surprisingly, content marketing figured heavily in the strategy.

“There’s a big audience with Food Network to build that bridge,” Melanie Watts, director of marketing for Lipton, recalled, adding that the digital content relationship was a first for the Lipton brand.

The effort, “Bright Bites Reimagined by Lipton,” began in August and will run though Thanksgiving 2017, featuring exclusive content on both Food Network.com and Lipton.com. Much of it features creative twists on traditional meals.

“Millennials love their memories of meal traditions they have grown up with, with their families -- and that is a source of happiness for them,” she explains. “But they are starting their own lives as cooks.”

Food Network research indicates that seven in ten of them want to put their own twist on recipes.

Not surprisingly, the effort leverages Food Network’s army of associated food influencers and bloggers who will also look to make connections by sharing their content.

About 200 pieces of content have been produced for the campaign in conjunction with Lipton content agency Mindshare Entertainment. They range from downloadable recipes to culinary videos and other, well, “snackable” content.

Chef Fest coincides with its Food Network partnership, which includes content such as a number short video series. One is called “Lunchtime Rescue” featuring chef Symon with celebrities who surprise real people with meals served with different Lipton tea drinks.

Initial segments feature actors Anthony Anderson and Sophia Bush, billed as “What happens when a celebrity rescues your lunch?” In one clip, Symon delivers, by way of Anderson, a lamb burger, red onions, crispy cucumber, and feta cheese combo to an unsuspecting social media strategist.

“You’re a Millennial and you are sitting at your desk, just about to eat another boring lunch,” says Lundberg. “Michae 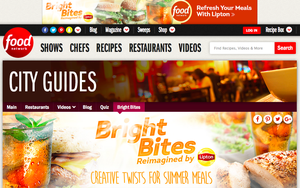 l helps surprise this person and re-imagines the possibilities, creating a memorable twist on the lunch-time break -- along with Lipton Ice Tea.”

Lundberg says the video pieces “focused on the consumer, produced in a format that can be shared socially.”

From Jan. 1 through Aug. 25, the Lipton brand has run about $26.0 million worth of national TV advertising on about 50 networks, according to iSpot.tv -- with the largest being NBC, at $3.6 million. Food Network has aired just $66,500 worth of advertising during this period.

A PepsiCo spokesperson says that through the Pepsi Lipton Tea partnership, a joint venture between PepsiCo and Unilever, TV buys have been made on Food Network.

Some early results are in. Lipton Bright Bites is seeing higher engagement on average than on the Food Network, with page views per visit 34% higher. Also, Food Network say Lipton is already seeing click-through rates double the average of all Scripps’ platforms for digital advertisers.

More specifically, critical key performance indicators will be available when the campaign ends sometime after Thanksgiving.

Lundberg says the bottom line for the campaign sits with the narrative: “It’s all about the stories you tell, and whether people really want to read them, watch them or share them.”
campaigns, millennials, tv
Next story loading