Dentsu Aegis Network’s Carat unit revised its U.S. and global ad outlook for 2016 up from its last forecast in March 2016, thanks in large part to better-than-expected growth, especially from digital media. But it also revised its outlook for 2017 downward by a similar adjustment, according to new data released by the media services shop this morning.

Carat boosted its 2016 U.S. ad growth estimate three-tenths of a point to +5.0%, and increased its global outlook one-tenth of a point to +4.5%, citing “a buoyant 2016, marked by high-interest media events including the UEFA EURO championship, the Rio 2016 Olympics and Paralympics, as well as the upcoming US presidential elections.”

Conversely, Carat downgraded its 2017 U.S. ad-growth outlook two-tenths of a point to +3.8% and reduced its global growth forecast half a point to +4.0%.

The data, which are based on current ad inventory prices derived from 59 markets across the Americas, Asia-Pacific and EMEA, project that total ad volume will reach $548.2 billion this year.

Carat said it reduced its expectations for 2017 due to “volatility in some markets,” but nonetheless considers it “positive momentum” for the global ad economy “led by the ongoing upsurge of digital media.”

“Whilst TV continues to hold the highest share of total media spend of 41.1% in 2016 -- boosted by high-interest media events -- it is expected to grow at a more moderate rate of +2.3% in 2017 with a lower predicted share of spend at 40.3%,” Carat said in its new report, adding that other traditional media, especially print, would continue to erode as digital gains share. 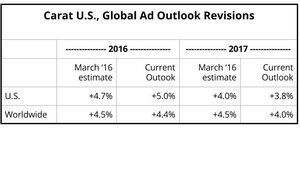