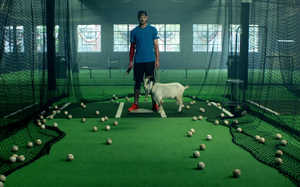 There’s Cam Newton channeling the brave and gentle bunnies of Watership Down for Under Armour. Von Miller and Aaron Rodgers pose as creative masterminds for Adidas. And Tom Brady swaps his trademark intensity for some downtime in bedroom slippers. Football season is officially underway, which means those shoe commercials will only get stranger as the season goes by.

But despite the focus on new creative executions and costly media buys for NFL and college games, experts say actually selling football shoes is a remarkably rinky-dink endeavor.

“American football cleats at retail are around $100 million and not growing,” says Matt Powell, NPD's sports industry analyst, “because concussion concerns are keeping kids off the field.” He tells Marketing Daily that Nike and Under Armour each have about a 45% share, with Adidas holding the remaining 10%. “But given the size of the market, it’s inconsequential.”

Unlike winter and spring, when shoe companies sell basketball shoes that tens of millions of people eagerly buy and wear without ever getting near an actual hoop, fall means the Big Three switch to selling image, not cleats. “They go for attitude,” says Barry Janoff, executive editor of NYSportsJournalism.

While Nike is coming off a raft of high-profile creative from the Olympics and has an overall advantage as the official uniform of the NFL, he says it has taken a different approach with football this year. “It went out and signed a bevy of rookies, including top two draft picks Carson Wentz and Jared Goff, both QBs,” he says. Unproven yet high-profile, he says the shift is an effort “to say 'we know what you’re about,’ to a younger demographic.’”

Adidas’ new spot, from 72AndSunny in Los Angeles, skewers the all-work-no-play ethic that’s the backbone of much of Under Armour’s creative. “Yeah, yeah. Hard work and dedication,” the ad begins. “But that’s not enough.” It then focuses on athletes that include Denver Broncos’ linebacker Von Miller, the most valuable player from last year’s Super Bowl, and Green Bay Packers quarterback Aaron Rodgers, challenging players everywhere to do something more inventive than simple sweat-and-run agility drills. “If you call yourself an athlete, create something,” it says. “Why are you even here?”

For its part, the latest Under Armour “It comes from below” campaign spot focuses on Carolina Panthers quarterback Newton running through a forest, digging deep into what motivates him. The athlete’s mom reads from the classic Watership Down, comparing him to the novel’s “Prince with a thousand enemies.” Droga5 is the agency.

(Of course, if you’re hankering for shoe ads that are a little more old school, don’t forget about Adidas’ Reebok division, churning out JJ Watt flipping tires and hunting greatness.)

And then there’s the unusual employment situation for New England Patriots quarterback Tom Brady, also an Under Armour athlete, currently under a four-game suspension for his role in Deflategate. He is barred from attending or watching practices, having any contact with team personnel, or even engaging in any football-related activities with his teammates. As a result, No. 12 will have a whole lot of time on his hands to “Do Nothing,” a new slipper-wearing campaign for UGGs. That campaign, with both print and digital, is from Camp + King.

Brady has been a UGGs spokesperson since 2010. UGG says the campaign will feature “witty banter” between Brady, actor Jeff Bridges and fellow New England Patriots Julian Edelman in a five-part digital series, all celebrating a man’s right to Do Nothing.

Janoff, meanwhile, doesn’t think the suspension will hurt Brady’s endorsement game. “He has his loyal followers and haters, so this won't change any minds,” he tells Marketing Daily. “The situation actually has his supporters rallying around him and against the 'dark forces’ of the NFL out to get him.” Besides his UGG ads and spots for Beautyrest mattresses, “I imagine that UA already has an "attitude" spot ready for his return in Week 5.”