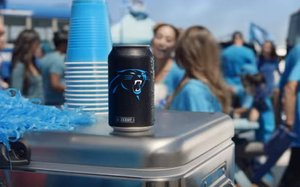 The extravagantly long spot (below), which has pulled an impressive 2.6 million views on YouTube since it was posted on there (and on the brand’s Twitter page) on Sept. 6, is a fast-paced, montage of vignettes that humorously convey fans’ passionate devotion to their teams. The various team-specific cans — which debuted last year and are now sporting a streamlined design by Jones Knowles Ritchie — are prominently on view throughout.

"Just like wearing your favorite player's jersey or team colors is a badge of honor, so is drinking from your Bud Light team can," said Bud Light senior marketing director Mark Goldman. The  long-form ad aims “to pay tribute to the passion fans feel for their team, and capture the optimism that we all feel as NFL fans at the beginning of the season, when it truly can be your team's year," he added.

The ad, from the brand’s lead creative agency, Wieden + Kennedy, was directed by Mark Romanek (known for Taylor Swift’s “Shake It Off” video and Beyoncé's “Sandcastles” video), and includes a voiceover by actor Michael K. Williams (“The Wire,” “Boardwalk Empire”).
Shorter (15- and 30-second) versions of this ad will air throughout the season, along with others, including some regionalized, team-specific spots in key markets.

The campaign will also employ radio, print, digital, programmatic advertising and retail elements. Bud Light will kick off each week’s first game as the presenting sponsor of Thursday Night Football on CBS and NFL Network, with brand and team-can integrations throughout the broadcasts.

Bud Light’s local agreements with 28 of the 32 NFL teams include limited-edition packaging and market-specific out-of-home advertising, featuring signature phrases associated with each team.

In addition, for the opening game, the brand partnered with iBotta to offer Colorado fans rebates on Bud Light purchases.