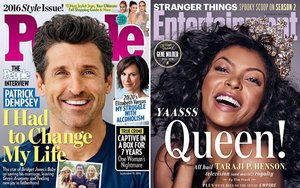 The initiative, anchored by two Time Inc. brands that cater to younger audiences, is an effort to tap into cord-cutters’ desire for original online programming.

The People/Entertainment Weekly Network (PEWN) will debut its special “The Children of 9/11: 15 Years Later.” The show focuses on five teenagers born after the attacks who never knew their fathers, according to a report from The Wall Street Journal.

The PEWN is a free digital channel. It will feature TV-style programming available on connected televisions, other Web-connected devices and People’s site. PEWN will live stream 24/7 with five hours of original programming a week, WSJ reports.

Content will also be drawn from the two magazines, as well as Time Inc. archives.

The PEWN will launch with about 100 hours of original programming, including daily shows about celebrities, pop culture, lifestyle and human-interest stories. Many of the shows will be unscripted, with some reality-style series and live specials, like red-carpet coverage, per Variety.

Jess Cagle, the editorial director of the two magazines, will host “The Jess Cagle Interview” and conduct one-on-one interviews with movie and TV stars.

“This is the new frontier,” Rich Battista, president of brands at Time Inc., told the WSJ. “We’re launching it in a new world and a new ecosystem where the future of long-form video is, where consumption habits are going and where advertisers are going.”