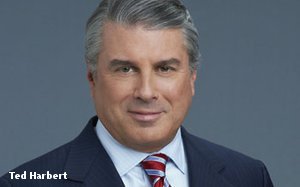 Ted Harbert, chairman of NBCUniversal Broadcasting for the last five years, is leaving. Steve Burke, CEO of NBCUniversal, announced the change in a memo sent around to employees.

Harbert had been at the post since February 2011 after Comcast Corp. completed its purchase of NBCUniversal. Before that, he was head of Comcast Entertainment networks, and started out running the E! Network in 2004.

Harbert had other senior TV network posts in his career, including chairman of ABC Entertainment, as well as an earlier NBC stint as president of NBC Studios.

"The businesses Ted oversees are firing on all cylinders, and he is ready to look for his next challenge outside of NBCUniversal,” said Burke in the memo.

Harbert's responsibilities are being taken over by other NBCU executives.

George Cheeks, president of business operations and late-night programming, and Paul Telegdy, president of the alternative and reality group, will have oversight for NBC’s first-run syndication business.

Jeff Bader, president of program planning, strategy and research for NBC Entertainment, will be responsible for the broadcast research group, which is also run by Wurtzel.